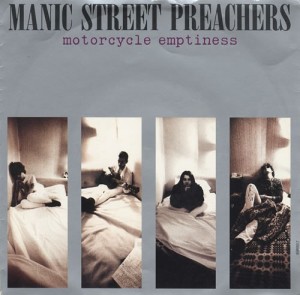 Sometimes it’s a Moment. The kind that can no more be repeated ever after than instigated in the first instance. Let me take you back to the Reading Festival 1992, Saturday August 29 …

The Manic Street Preachers, who’ve been touring their debut Generation Terrorists around the world all year, are set to play to their biggest UK audience, third on the bill on the main stage. It is a beautifully sunny afternoon, crowning my last summer at the NME. I’m walking with close music industry pals upfield, away from the backstage paddock – retreat of all media hangers-on – in order to catch their teatime set (Ride have the “Magic Hour” slot, before hotly-anticipated headliners Public Enemy). I’m still walking back, in order to take in the full impact of this ascendant foursome finding their mark, when Motorcycle Emptiness roars into life, and that urgent guitar hook just does something to me, inside. It rises up through my entire body like an annual service. A perfect storm of good mood, optimum refreshment level, perfect light, clement weather, expectant time of day, proficiency of playing, timelessness of riff and all my feelings about the Manics rolled into one Festival Moment. I shall never forget it. I haven’t looked, but I hope it’s not available on YouTube. (Even if it is, it will be sucked of magic.)

I am blessed to have made one or two friendships with musicians I admire in the 32 years since I began trading as a music journalist. (It’s been a while since I thought of myself as primarily that, of course.) Those solid bonds aside, some meaningful relationships I maintain are more like connections that endure and which mean a kinship is perpetually felt. Perhaps the most interesting and eventful of these has been with the Manic Street Preachers. Too many events to tell here, in any case. I was at the NME when they burst forth onto the scene, initially skeptical (mainly because their first champion was the late Steven Wells) but rapidly swept up by the breakneck narcissism of You Love Us and the raucous, squalling iconoclasm of Motown Junk. What really won me over was their thirst for knowledge – Nicky and Richey, in particular, the band’s thematic architects and footnote compilers, were walking sponges. They didn’t need anyone in the future to invent Wikipedia.

I was at the lightbox in the art room the morning Ed Sirrs’ shots of Richey’s “4 REAL” carving came in. I witnessed James and Sean painstakingly constructing what we in the biz call “the music” for Generation Terrorists at Black Barn studios in Guildford while Nicky and Richey waxed controversial in their Joe Orton bedrooms about Slowdive and Hitler. They played privately for me when I had moved to Select in a Putney rehearsal room. I sat interviewing Richey on his bed at Hookend studios in Oxfordshire for Gold Against The Soul while he drifted off to sleep, murmuring about Steve Lamacq, after which I wandered down to the studio where James was laying down the vocals for Symphony Of Tourette. As revenge for drinking Richey to sleep, all four of them plied me with whiskey at a Soho rock club so that I later threw up in the fireplace of the flat they were billeted in. I cleared it up myself.

Events slowed down after that, as so did I. But every time I saw them, we greeted each other fondly. I’ve cheered their continual rise to Radio 2 house band, stadium staple and Welsh national team, and never lost interest in the music they make, and the impossible lyrics Nicky now writes solo for poor James to wrap his tonsils around.

Motorcycle Emptiness reigns supreme. It captures not just the Icarus-like folly of the Manics’ overnight bid for Guns N’Roses excess, but the incredible skill with which James and Sean were even at that early stage able to build whistleable rock’n’roll majesty while the other two goofed off with their books and their blouses. It was heartbreaking when Richey signed off in 1995 and I’ve spoken to the others about it in the ensuring years of healing. They are now candid, thoughtful, big-hearted, witty, self-aware middle-aged men, always one step ahead of what the sell-out police have deemed cool and uncool. But the work that they continue to do, when it’s good, is only as good as Motorcycle Emptiness. This would be the case even if my Festival Moment had never happened. I’m glad it did, though.

I will leave you with a classic Richey/Nicky stanza that would take an actual ubermensch to transform into song. It doesn’t scan, it doesn’t rhyme, it has no rhythm. And yet. And yet …