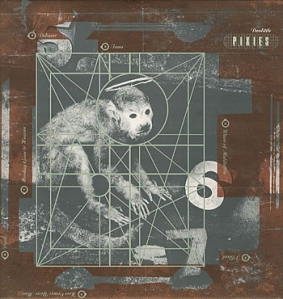 What an injection of East Coast American adrenaline the state of Massachusetts administered into the vein of that stereotypically English-Scottish-Australian roster of 4AD in the mid-80s. First, Throwing Muses, from Newport, Rhode Island, who’d decamped to Boston and were the label’s first American signing. Then, the small-“t” Pixies, who’d formed around the University of Massachusetts in Amherst. Both bands, who bent rock to suit their own fiercely cerebral, idiosyncratic, cross-gender agendas, seemed perfectly suited to each other as labelmates, shared a taste in producers and often played on the same bill. (My college friend Rob and I saw them both at the Town & Country Club in May 1988, with Pixies supporting the Muses – and, if I remember correctly, fem-dance group The Cholmondeleys on first – and again in ’89, at which the order was reversed.)

But who were these bands? As 4AD completists it was inevitable that either Rob or I would purchase Come On Pilgrim, the Pixies’ debut mini-LP, without having heard a note. Indeed, Rob has pricked my memory: we visited the degree show at the Royal College of Art of photographer Simon Larbelestier in the summer of ’87 and the hairy-backed Victorian freak-show gentleman adopted for Pilgrim’s sleeve was displayed therein. Making this link to the RCA – where Rob was about to start his own MA – he invested in the album in suitably Pavlovian manner. My clear memory of first hearing the subsequent Surfer Rosa is in a large, roomy artist’s pad in Notting Hill, where Rob was house-sitting for one of his tutors in Easter ’88. Salad days.

The second time we saw the Pixies in London, they were promoting Doolittle.  Rob remembers the band members coming round “all hunched with cigarettes pinched between finger and thumb” down the side of the venue while we were in the queue. With our feet in the air and our heads in the ground, we worshipped the Buddha-like Black Francis and felt the potent pop thrill of singalong songs like Where Is My Mind?, Gigantic, Monkey Gone To Heaven, Wave Of Mutilation and Debaser.

It’s painful to have to single one out, but it’s ideal that it’s not a single, as the Pixies have always either chosen the wrong tracks to be their singles, or simply produced too many suitable candidates on each LP for justice to be done. Debaser is a classic single that never was: adored by the faithful and treated as an old pal, and not in any way debased by Paul Rudd belting it out in the car in Judd Apatow’s This Is 40, a damning indictment of cultural disconnect between the parent generation and their children, and between men of a certain age and women. (His kids yawn in the back, while his wife treats his spirited singalong with amusement.)

Frank Black tears into this recording with its highbrow nonsense lyric as if these were his last two minutes and 52 seconds on earth, a sentiment in line with the apocalyptic fatalism that pervades much of Doolittle (“got killed by ten million pounds of sludge from New York and New Jersey … Now there’s a hole in the sky … Everything is gonna burn … Drive my car into the ocean … A big, big stone fall and break my crown”). Black’s hymn to debasement is short on detail (“Wanna grow up to be a duh-base-ah”), but long on beret-wearing film-school cool, making an explicit reference in those sliced-up eyeballs and the “chien Andalusia” to the silent 1929 Luis Bunuel/Salvador Dali short Un Chien Andalou. Neither film nor song has a plot to speak of.

The BFI’s Museum Of The Moving Image opened on London’s South Bank in 1988; ill-fated, it would turn out, but fun to visit in those happy first years for its primitive interactivity, movie heirlooms and well-stocked bookshop. I feel sure I did so within its first year, and that’s when I saw Un Chien Andalou for the first time, transfixed by its darkly playful cut-up imagery in the little dedicated viewing booth for 21 minutes. I felt like staying for the next showing (it was on a loop), mentally prepared this time for the unannounced eyeball-slicing money sequence, in which the film cuts from Simone Mareuil’s eye about to be passed over by a straight razor to a cloud slicing into a full moon and then to a dead calf’s eye being bisected. It is one of the least forgettable moments in the history of the moving image. Who wouldn’t write a song about it?

Debaser doesn’t quite cleave to the quiet-LOUD, bam-THWOK mechanic of the stereotypical Pixies song, as after that neat, buttoned-up bass intro, it leaps into life, with a tambourine hurrying along the first verse, Black announcing to the world that he’s got him a movie. The chorus invites the rest of the band along to shout, “Chien!” and it’s a frantic evocation of Iberian canine declaration. Cobwebs are blown. Ears are syringed. Black’s vocal cords are ravaged for your listening pleasure. Kim Deal offers a characteristically dry spoken endorsement of the title (and she was so … quiet about it). And it sounds for all the world that he’s already grown up to be a duh-base-ah.

British producer Gil Norton does a bang-up job on Doolittle, taking the graphic sound of Surfer Rosa and giving it a fuel injection. He would remain an ally. The LP was their first hit. Monkey Gone To Heaven – a close contender for this entry – gained college radio traction in the States and consolidated the band there. But – unlike Samson in Gouge Away – success did not sap their strength. The animosity that precipitated their break-up and made frankly mercenary their cold-war reformation was nowhere to be seen in the late 80s and early 90s when they surfed that wave of adulation. I declined to see them play when they reformed, as I’d seen them the first time, when the band might still amble past you in the queue.

Thanks, Massachusetts. Thanks, Mr Dali and Mr Bunuel. Thanks, Rob.