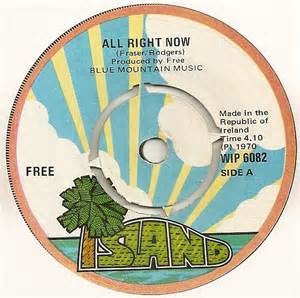 More cowbell. I had Paul Rodgers in as an august guest on 6 Music and it must have been before he joined Queen as I know this didn’t come up in our on-air chat. He was a nice, voluble guy, if a little orangey in skin tone and practiced in his responses, and he must have been promoting a solo single as we were duty-bound to play it – and did so, happily. Because the 6 Music guest format was three tracks, wrapped around two hefty chunks of chat, I recall opening with the single (of which I can now find no record), during which I told Rodgers off-mic that I would also be playing All Right Now and, for variety, an old Free album track I’d carefully chosen as I liked it and it rarely got played on the radio. He was delighted that I’d gone to all the trouble, but his passive-aggressively controlling manager tried to intervene and stop us from playing it, as the interview was about his solo career and not his past. Rodgers overruled her and we played it. I wish I could remember which one it was, but it was from Free’s kickstarting 1970 third album, Fire and Water, from which came their stake in Actual Rock History.

All Right Now was, and is, a thudding blues-rock keystone that’s so good it survived the chemical castration of being used in a TV advert for gum in 1990 and being a Top 10 hit again, 21 years after the first time and in a more sanitised context. This classic pick-up tune found a new, younger audience thanks to the aspirationally sweaty couple on the hot bus stuck behind a combine harvester who bond over the ulterior offer of his last stick of Wrigley’s (an act of spearmint philanthropy that causes her to get off the coach at his stop, in order no doubt to seal the deal, get a room and enjoy some mutual mastication). Free had split in 1971 (drugs, musical differences, sales), given it another bash in 1972, then split again in 1973. How nice for them to have an “As Seen On TV” hits album in the charts in 1991.

It would be coy to attribute the longevity of the Free name to anything other than All Right Now. It is a career in four minutes (five and a half on the album), and it’s enough to have the faces of Rodgers, bassist and All Right Now co-writer Andy Fraser, tragic guitarist Paul Kossoff and so-solid drummer Simon Kirke hewn into rock. Most bands form and split without coming anywhere near a four-to-the-floor geological event of the catchy, raw power of All Right Now. Unlike that chewing gum advert, it’s timeless.

Kirke’s industrial cowbell (more of that, please) leading a heavy-breathing beat, Kossoff’s roughly wristed riff, and just a wordless noises-off moan-and-yelp combination from Rodgers: it’s a textbook 60s-into-70s intro by a bunch of hairy blokes from London and Middlesbrough wishing they were from Memphis or Chicago, and wishing so hard it almost comes true. The blues was in these men at the time, and yet they would sell millions, fill arenas and steal festivals, just like the bluesmen didn’t. Like Mott and Zeppelin and Purple and Argent – and subsequently Bad Company – America would accept them as natives and form orderly beer queues to be near them. Somebody had to find a way of getting past the almost-academic legacy of the Beatles. In rediscovering their inner caveman, groups like Free achieved that Holy Grail.

If Fraser is playing the bass at all at the beginning, it’s too low to tell. But what’s key about the arrangement (by the band, John Kelly and future Queen man Roy Thomas Baker) is the space between the strokes and thumps. This allows the air in and accentuates each grunt. “There she stood,” regales Rodgers, his voice even at 21 sounding lived-in and world-weary, “There she stood in the street, smilin’ from her head to her feet.” You’re picturing the scene. It does that.

Much of the lyric is presented as a two-way reported conversation – no wonder it became a storyboard for a commercial. He was like, “Hey, what is this?” and she was like, “Look, what’s your game? Are you tryin’ to put me to shame?”

I love the horny protagonist’s chat-up line, “Now don’t you wait, or hesitate. Let’s move before they raise the parking rate.” At any rate, he takes her home to his place, “watchin’ every move on her face,” and it’s he who tells her to slow down when they get there. Not such a macho ape after all. He’s a sensitive lover. And at the end of the day, it’s all – beat – right now, baby, it’s a-all – beat – right now. (I love classic songs that don’t quite scan, it’s like the lyric had to be contained somehow by the tune and not the other way around.)

Highlight for me is the machine-gun snare fill by Kirke after the “parking rate” line and a Rodgers howl before the first chorus, or else the polite appearance of the bass for the bridge under a blowtorch solo from Kossoff even in the truncated single edit. A fine, serpentine vocal take from Rodgers, too – let’s hope it was live – as spontaneous as jazz in parts, and the lust never sounds play-acted.

I can’t lie, I thought of buses and chewing gum while writing this. But I didn’t go out and buy any. So that’s all right. Now …