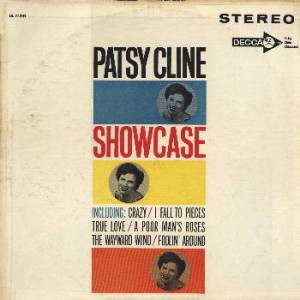 Though I’m a lot rock’n’roll, I can’t really even claim to be a little bit country. I’ve watched Nashville, both the classic 70s movie about the hub they call Music City, and the current, campy TV series, and I’ve long appreciated the Country & Western influence on much of the American rock of the 1960s that I hold dear. I have albums by Gram Parsons, the Flying Burrito Brothers and the Byrds that make perfect, bootlace-tie sense to my ears, I actually enshrined a song from Dylan’s Nashville Skyline into The 143, and if there is a lovelier, more plangent sound than a pedal steel, I’d like to hear it.

But Patsy Cline is a different order of “meat and three”. The first female artist to be inducted into the Country Music Hall Of Fame (in 1973; it only took them ten years after her untimely death at 30), Cline’s reputation and appeal travelled way beyond the parameters of her chosen genre and subculture. The longer-lived Dolly and Tammy self-evidently had longer careers, but it seems me – as a non-expert – that she towers over them all from beyond the grave. Beset by bad fortune like any self-respecting country singer, Cline’s life was not the self-destructive tragedy of near-contemporary Hank Williams, and she was enjoying all the fruits of success when her plane crashed in a Tennessee forest in 1963.

Crazy is hardly an obscurantist choice from Cline’s crossover repertoire, but for me, it shines brightest and interferes with my heart in a way that I might not expect from a genre whose mawkishness can be a barrier to my full immersion. Written by a then-unknown, clean-cut Willie Nelson, who recorded it himself a year later on his debut LP, it’s a unisex lament to the inevitability of a split-up. Fatalistic, as many classic love songs tend to be, for maximum yearnitude.

The protagonist – female in Cline’s impeccable reading – declares herself crazy for feeling so lonely and for feeling so blue, as she knew her partner would love her as long as he wanted, and then “someday”, leave her “for somebody new.” If she did know this, why did she go with him in the first place? Well, if you need that question answering, you have never been in love. Cline has. She’s “crazy for tryin’, and crazy for cryin’,” and “crazy, for lovin’ you.” The way she lets us in on this apres-relationship confession in that husky voice that is apparently a contralto (ie. low for a lady), almost makes her sound as if the loss and the inevitability are part of the experience. Better to have loved and lost, than to have loved and lost and not seen it coming.

A polite piano intro, augmented by the lazily ascending twang of a guitar, give the song a trilling, balmy porch setting, the better to stage Cline’s wistful but self-lacerating dissection, swept along by the brushes of whichever of the two drummers played on the parent Showcase album. It’s an idyllic backdrop to a gloomy conclusion about the fallibility of the heart. The velvety baritone backing of none other than Elvis’s partly-ordained Jordanaires gives such depth to the arrangement (they were still indentured to the King in 1961 but would later be too busy to join him in Vegas and handed over to the Imperials), but it’s Cline’s rich account that cuts through, the ends of each line quivering into the trees on the wind. In “crazy for feeling so blue,” it’s the word “feeling” that she hammers home: crazy for feeling so blue, the “blue” note held for longer than you might think feasible.

Each word Cline chooses to emphasise seems perfectly selected. It’s as if she had the ability to italicise with her tonsils, as she went along. I also love her more upbeat, clip-clop 1963 rendition of the Bob Montgomery-quilled Back In Baby’s Arms (introduced into the gumbo of Trent Reznor’s Natural Born Killers soundtrack with creditable plurality), but the career-defining ballad wins by a nose. I suspect if she’d lived, the KLF would have had her on a record in the 90s; as it is, airborne catastrophe immortalises her as a kind of guardian angel in perpetuity.

Not even a hit in the UK, Crazy found me somehow, somewhere along the long, lonesome line. There. I hope I sound like the country expert I’m not.