In order to keep The 143 tidy, I always tried to regulate the size and style of each entry. I generally avoid hyperlinks, for instance, and although it has been suggested, the purist in me ruled out embedding YouTube videos or streams of the songs being described and dissemintated. (Others have created Spotify playlists, notably the fastidious and much appreciated Stef Galley here.)

So, if anything comes up that’s an adjunct to the heavily formatted entries, I shall post it here.

On publication, I was contacted by the splendid Julianne Regan – yes, she of All About Eve fame, whom I first met and interviewed on the balcony at PolyGram, overlooking Hammersmith Bridge in London for the band’s second album, Scarlet and Other Stories (a Top 10), in 1989. She sent me a link to her very own mash-up of Theme for Great Cities, which is a pretty surprising take. (I seem to recall guitarist Tim Bricheno throwing half a brick off the balcony and missing a seagull. He was not long for the band – he left for 17 years, then returned.)

The introduction to this entry refers to a night spent in Liverpool in May 2015. The friend who made it happen, Kate, took these splendid photographs: (from left) me, Michael Legge, Pete Wylie at Ye Cracke. 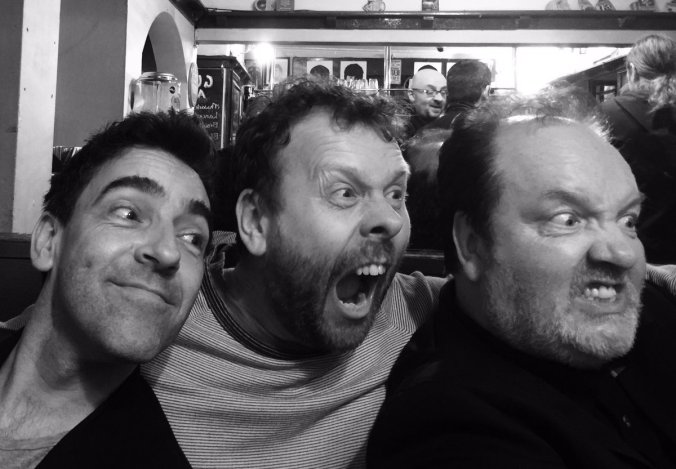 In addition, before I wrote up my entry on Story of the Blues, I exploited my access to Pete Wylie and asked him a few questions about the recording and life of the song. I used some of the information he passed on in the entry, but for the record, these are his answers in full.

Who played on Story of the Blues?
I sang, played everything but the bass [Carl Washington] and the strings, and some of the backing vocals. I arranged it all … I even learned to programme the Linn drum during the sessions! Mike Hedges produced heroically with me.

Was it recorded as a single in one session?
God, no! It was a labour of love recorded over months, experimenting, trying different sounds, learning new technology, making mistakes, then trying even harder, because I wanted to make a special record that had a chance of doing some good, and lasting forever. Inspired by Boys From The Blackstuff by Alan Bleasdale. [Clash associate] Kosmo Vinyl has a role in its beginnings too.

Do you regard it as fondly as the rest of us do??!
I am very proud of it, and I do like it! I’m thrilled when it’s on the radio – and it still is, and often! And it’s amazing that people can let me know how they feel about it now via social media, and it seems to have the hoped-for effect to this day. And I love playing it live still, and finding new ways to sing it. Plus, sadly, it seems that the message is as valid now as it was then. Or so I’m told …

Did Everton fans mistake it for a song about their team?
They did, and do, and even as recently as a month ago, there was talk among them on Twitter of making it their song. I know they’ve played/sung it in pubs etc. on many occasions, when they seem willing to forget my otherwise allegiances … And Chelsea, and Man City, and other clubs have used it too! Though having my songs played regularly at Anfield by [long-serving matchday announcer and DJ] George Sephton is still my preference!

The House Of Love Christine 1988

My memory of purchasing the first House Of Love album was piqued by the memory of a photograph taken by my college friend Robert Mills in his student digs. He printed two takes in the dark room: the first is too light to be able to make out the LP cover; the second, where you can’t make out me, is clearer. Together, I think they form a rather nice pair, and remind me of a time when buying a record you really desired was an occasion on which to take a photograph (and at a time when taking a photograph meant something, and had to be chosen very carefully). You can also see a copy of Follow The Leader by Eric B & Rakim, which I must have bought on the same trip to Our Price.

Everything But The Girl Each and Every One 1984

Having confidently interpreted the lyric to my favourite EBTG song in the entry, I was contacted in 2013 by that nice Tracey Thorn, who is something of an authority, having actually written the lyric. She provided a full and frank corrective to my interpretation – which was, in analytical terms, way off – and I asked if I might publish her version of events. She said yes.

I hope I’m not going to spoil it for you forever by telling you that it is not a love song at all, but one of my early attempts to write a swingeing attack on the patriarchy – albeit in disguise.

I’d got really fed up of the way the Marine Girls were written about by male journalists – a lot of the press seemed to me patronising and restrictive – a sort of, oh bless aren’t they sweet, and not bad for girls! So the opening line, “If you ever feel the time, to drop me a loving line”, doesn’t refer to a love letter, but a “nice” review from a journalist. And the rest of the song is me being fed up with the way I felt women’s achievements in general were belittled, their ambitions thwarted, the possible roles available to them set in stone. If you listen to the lyrics again now, it might sound different.

Now, I’m the first to admit that it is completely my own fault that no one ever really heard that in the song. It was way way too subtle, and the thing of writing a feminist song in disguise didn’t really work. i started being a bit less subtle from Love not Money onwards, though I’d still argue that often my lyrics are “heard” as being far more personal than they are, and any wider implications overlooked.

This is all in my mind because I’ve just written an essay for Radio 3 about The Book the Changed Me, on The Female Eunuch, and reading it at uni and how it started to influence my lyrics. Writing the essay reminded me of some of the songs on Eden, and how I wove my new feminist theories into them, but often in too discreet a way. I think I was trying to use pre-existing pop language, so that the songs still sounded like pop songs, rather than just me shouting – FUCK THE PATRIARCHY, I WON’T DO WHAT YOU TELL ME TO DO.

Hope you don’t mind all this being sent your way. You seem to me like someone who likes to know the stories behind things, so here’s mine about Eden!

That told me. If any other songwriter wishes to add a similarly enlightening addendum, they now have an official forum to do so. Come on, Paul McCartney, tell me I’m wrong about Blackbird!

Some nice comments about The 143: Circles Of Life

There’s not much point hanging around waiting for somebody to pay you to write about music. And if they do, they’ll probably ask you to write about something you don’t have much interest in. Why not just write what you want for the love of it? Lots of people do it and some of them are big names. Andrew Collins won’t mind me saying he’s a very methodical sort and therefore it’s not surprising to find his music blog aims to pick “the 143 best songs in the world”. It’s more light-hearted than it sounds.

I’m absorbed by Andrew Collins and his ridiculously simple yet simply ridiculous pursuit.

It’s an honour to be in close vicinity to a Jimmy Webb composition – many thanks Andrew!

Website Of The Day 23 April 2014: We may have just discovered our new favourite blog. It’s certainly gone into our top ten, which is quite apt … Rarely have we seen such a personal journey be so successfully displayed … Each entry is beautifully written, light-hearted and informative – never seeking to justify its inclusion (why should it?), but simply telling the story of why the track is so significant … We love this blog and will be following with interest as the 143 develops over time. 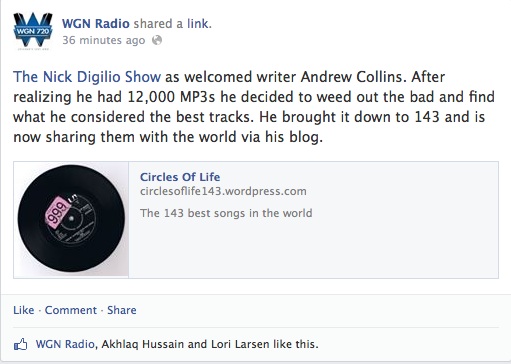 Some of the best music writing around us is still coming from the mind of Andrew Collins. There’s a trove of it here.