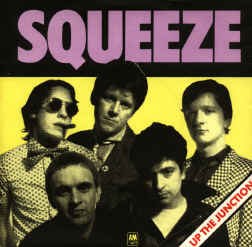 It’s hard to convey to the youth of today how vital Smash Hits was at the end of the 70s. In an age so pre-digital “sharing” meant literally lending things to other kids, we would pass copies of the fortnightly pop-words magazine around in the playground, eager to discover what our favourite bands of that post-punk/disco era were actually singing. Imagine it, young people of today! To care about what artists were singing! And to have no immediate method at our fingertips of finding out from one fortnight to the next!

The lyrics to Up The Junction, the third smash hit from this glowering bunch of posers from a place called Deptford, appeared across a full page in “ver Hits” – as it was not yet self-mythologisingly known – and what an unusually lengthy and involved rearrangement of the English language it was: each verse a chapter in a story and no chorus, no repetition, no deviation or hesitation. Just a minute: thinking about it, their previous hit, the snarlier Cool For Cats (which I’d exchanged pocket money for), didn’t really have a chorus either beyond the line “co-oo-ool for cats”, and it too had beguiled my fragile teenage mind with its literate turns of phrase and its Sweeney imagery. Who were these clever blokes who looked like they were trying so hard to disguise their cleverness?

In the mid-80s, by which time I’d gone off to art school in faraway London but retained my devotion to Smash Hits, my path almost crossed with that of Squeeze, when one of our visiting tutors at Chelsea School of Art (headquartered in Wandsworth, a borough I’d first heard about through Cool For Cats when London was a foreign field) made a head-turning request. Could I write out the lyrics to the next Squeeze album, Cosi Fan Tutti Frutti? His name was Rob O’Connor, and he ran his own design company which specialised at that time in LP sleeves. Honestly, we with a pop sensibility worshipped at his self-effacing feet, especially when we discovered that it was his handwriting on the sleeve of the Banshees’ Kaleidoscope album. You should know that my handwriting was mannered and cartoony in 1984, hence the speculative calligraphic commission. In the event, my lyrics (and I really did write them all out, by hand) went unused. But it was close. And I got paid.

It is not to in any way denigrate or underestimate the deceptively intricate power of Squeeze’s musicianship – something hard which they made look easy – but the lyrics were always the thing for me. The very fact that Glenn Tilbrook, who wrote the music, engineered such a witty yet moving job of singing the words, which were written by Chris Difford, makes Up The Junction a sort of definitive encapsulation of what made – and makes – their Lewisham Lennon/McCartney symbiosis one of pop and rock’s essential services. The lyric – a three-minute kitchen-sink drama – would be severely diminished without the singer, and the singer would self-evidently just be humming without the lyric. (I know Difford sings it himself, solo, but I hope he would agree that Tilbrook’s rendition is heavenly.)

You know sometimes when you have to just shut up and reproduce the lyric, like Smash Hits did in 1978?

What audacious rhymes. What Davies-esque evocation of the capital via place names.

Although we subsequently learn that the job with Stanley involves working eleven hours, we discover nothing more specific about the nature of the work. But we don’t need to. As for the delicate crux of this cautionary tale …

More fatalism. Tilbrook’s lilting tones are so free of animosity or self-pity, so devoid of judgement or blame, you’re inclined to sympathise with both parties, especially when he vouches:

I put away a tenner
Each week to make her better

Writing short stories is hard. Any short story writer will tell you that. To do so in verse, in rhyme, and in half-rhyme (“tenner”, “better”), is harder still. “And when the time was ready, we had to sell the telly”? Heartbreaking. “She gave birth to a daughter, within a year a walker, she looked just like her mother, if there could be another”? This is a man declaring his love for a woman who until recently he was referring to as “the girl.” And yet, two years later – and it really is like a country song now – she’s “with a soldier” and he’s going “from bar to street to bookie.”

It’s only at the bitter end – and bitterness takes that long to rise to the surface – that our South London protagonist admits he’s “up the junction”. The song’s title is also its punchline, its killing joke, its crowning glory. This is a London A-to-Z of emotion.

Having almost skipped over this band’s virtuosity – a trait hugely unfashionable in the white heat of New Wave – I will throw a bone to seasoned pro Gilson Lavis, whose exactitude from the drum stool lent both weight and a lightness of touch often simultaneously to the many timeless hits of Squeeze. Such an asset. Maestro Jools Holland, an uncontainable personality who dipped in and out as his parallel broadcasting career flourished, was closest to Squeeze’s only other permanent member, and he and Lavis came together in the 90s and are still going strong in the Rhythm & Blues Orchestra. That’s two lasting relationships from one band of brothers.

I find it’s easy to forget how good Squeeze were – that’s how good they were. But they were the equal as a British singles band to Madness, or the Kinks before them, or Blur after them. They were what a fortnightly pop-words magazine in the steam age was invented for. 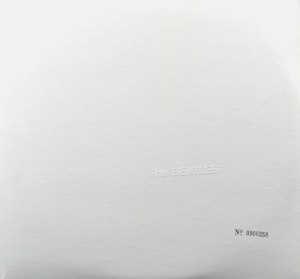 Alright, I know what you’re thinking. This is a Paul McCartney song. He wrote it. He plays it. He sings it. No other Beatle was involved in the making of this song at EMI Studios on November 11, 1968, unless you count George Martin as the fifth Beatle. McCartney even taps out the rhythm himself with his shoe. It’s a solo record in almost every sense, except the sense that it was recorded for a Beatles album called The Beatles and is credited to the Beatles.

You might also be thinking that it’s willfully perverse to consider the 200+ songs the Beatles recorded between 1962 and 1970, many of which altered the direction of popular music, many more of which are lodged in the global imagination for all time as modern standards, some of which are as barnstorming and unforgettable as A Day In The Life or Strawberry Fields or She’s Leaving Home or The Fool On The Hill or All You Need Is Love or Tomorrow Never Knows, and to pick blooming Blackbird.

But Blackbird it is.

Purism whispers in my ear and tells me that actually, what I really like listening to is the sound of a blackbird. Maybe so. But it was Paul McCartney who started thinking about the civil rights struggle in the southern states of America while he was up in Scotland and worked those thoughts into a folksy ditty that awkwardly pivots on the fact that “bird” is – or was – swinging slang for a “girl”. I’m quite partial to the sound of a blackbird singing, whether it’s in the dead of night, or the light of the afternoon, but I also appreciate the sentiment that McCartney is heralding the black population’s arrival at its “moment to be free”. It is both a delightful hymn to the natural order of things, and a stirring nod to racial emancipation (and indeed, a return to the natural order of things).

Sandwiched between the literal I’m So Tired, an India-penned Lennon tune, and Harrison’s Baroque but barely listenable Piggies – both played by the whole band – Blackbird is a blessed relief from the padded-walls insania of the bulk of The White Album and a welcome burst of melody on the largely tune-deficient Side Two, which has a certain bestiality to it, with a certain raccoon also on the slate.

A simply picked tune on a Martin D 28 acoustic (you know I looked that up), recorded outside, there is on the millpond surface so little to it, musically, although archaeology reveals roots in a tune for lute by JS Bach, Bourrée in E Minor, and that rather suggests, shockingly, that Paul McCartney knows what he’s doing when he sits down to write. None of this is news. But I do love the context of the song. The Beatles is a rollercoaster of highs both foot-tapping and head-pounding, and lows both minor and major. Blackbird is like a little, two-minute, sitdown chillout about a third of the way through.

Not sure why I’m making apologies for one of my all-time favourites. It was number 38 in Rolling Stone’s 100 Greatest Beatles Songs.

I was lent the vinyl album in the late 80s by my more classically schooled friend Chris. (He also brought me up to speed with Lennon’s solo albums and Peter Gabriel’s, for which I remain eternally grateful.) I later splashed out on the CD, which was, of course, a disappointment in physical packaging terms, with its tiny inlays and its frightfully ugly white plastic spine. It doesn’t matter, in the end. It’s still my favourite Beatles album.

So, we’ve done it. We’ve added the Beatles band to The 143. It feels good to bring them into the fold, even if George and Ringo were literally on holiday while the song was recorded (and John was in another studio doing Revolution 9); the Beatles are in. And so is birdsong.

Should I have gone for Dear Prudence?