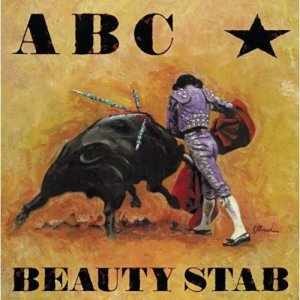 It’s not important, by which I mean it’s not important to say that it’s important, but this was the first song I logged as an entry in The 143. Its placement is random, as each inducted song is as vital as the next. I began with ABC not because the group’s name places the song first alphabetically, although the confluence is rather pleasing.

Let’s do this. Having trained myself to love only punk and post-punk music in my early-to-mid teens, it took the more electronic/cinematic sweep of what we called New Romantic music to break my self-imposed spell circa 1980-81. Into the strict buzz of punk rock electric guitar I allowed synthetic beats and beeps, and via the “white funk” of bands like Pigbag, A Certain Ratio, and ABC, and Spandau Ballet’s Chant No. 1, bongos, brass and strings.

We all fell hard for The Lexicon Of Love didn’t we, in that summer of Smash Hits, 1982? It felt like it. To say that ABC injected some glamour back into the people’s music was an understatement. It almost felt like contraband in my record collection, which remained mostly dark and dirty with Bauhaus, B-Movie and the Bunnymen still dominant. I don’t know how I missed Beauty Stab, the gleefully arrogant follow-up, in 1983, but I must have, as it only crossed my radar when I arrived at Ralph West Halls of Residence in Battersea, London, in September 1984. My new neighbour, Stephen Clasper from Morpeth, lent me it, and it knocked me sideways.

It was big and bold, and it had guitars. And where Lexicon swooned, Beauty Stab, well, stabbed. It wasn’t as great a leap sideways as it felt – both LPs were overstated and epic – but this one had blood rushing through it. And although I was taken by the singles That Was Then And This Is Now, and the appeasing S.O.S. (neither of which went Top 10: a mark of its chilly reception), it’s this track that got under my skin and has stayed there all these years. To the point where I have chosen it over ABC’s fireside favourites.

Moving from one founder of ZTT, Trevor Horn, to another, Gary Langan, the sound on Beauty Stab is spare and graphic. Unzip opens with a guitar riff that sounds synthesised, even if it isn’t, and the drums sound triggered, even if they aren’t. It may simply be precision playing (Andy Newmark had George Benson, John Lennon and Pink Floyd under his belt), but it raises the tension for what is clearly an ode to sex. When Fry growls, “Love’s just a gimmick, a mime or a mimic,” he seems to be making a bonfire of his own recent pop past. The sax sounds predatory, the bass is around Joe Cocker bassist Alan Spenner’s knees, and the tom toms are tribal. It’s a new lexicon of lust.

Fry’s sap is certainly rising (“Why take pleasure in censorship?”) and when he delivers the killer line in the second verse, “She’s vegetarian except when it comes to sex,” I blush every time.

It’s all over in under three minutes. As well it might be. I am proud in adult life to have played this song on national radio with Martin Fry in attendance. And I remain grateful to Stephen Clasper for the tip-off. We both leapt on the stuttering cartoon-pop third album How To Be A Zillionaire the week it came out in January ’85, which was another leap again.